Get into the flow of your surroundings; just don’t get sucked into the current too heavily.

There was a robust Mexican man by the name of Roberto (pronounced Hah-Bear-Thoe) who loved to hang out at the local tavern and sing karaoke. Roberto (once again, pronounced Hah-Bear-Thoe) was not the most talented crooner in the local establishment, namely “Dixie’s Rebel Yell,” but he held his own on some evenings, mainly those being the ones where snow has covered the city, and the only patrons at “bel yell” (as locals like to call it) are those that can give two shits about singing. Those sumbitches are there to get a good ol’ fashioned guzzlin’.

Roberto’s (Hah-Bear-Thoe) preferred diddy was For Your Eyes Only by Sheena Easton. Yes…the Bond movie theme song. However, to Roberto (remember to pronounce the first ‘R’ as an ‘H.’ Add the “air” sound when saying the letters between ‘B’ and ‘T.’ Finally, do NOT say a hard ‘T’ on the last syllable of his name! It must be a rolled ‘T’ into an ‘H’ sound. You may have to practice it a little. Go ahead. We have a few minutes. Just start reading when you feel you are ready. This step may be one of THE most crucial parts of his name, especially if you are needing to say it in a variety of situations, such as entertaining guests who happen to have a slight, how shall we say this, social justice warrior bend to their personalities; when, possibly, you decide, after a night of heavy imbibing, to pick up a coupla tacos (pronounced Thaw-Koze) from an authentic Mexican (pronounced Meh-He-Con) restaurant drive-thru at three in the morning and the guy on the other end of the intercom is HIS cousin (by his, I mean Roberto [Hah-Bair-Thoe], who will, from this moment forward, be referred to as H, as to avoid any more confusion with his name), Miguel (pronounced Mee-Gyel), who has had H’s back ever since they were in the 5th grade, and H was DDT’d face first into a pile of dogshit

Mr. Michaels stood in the corner of his classroom. The students were taking a test. This one was over Fahrenheit 451. It was easy for Michaels to hang back in the corner and get some work done at the same time. He could see the backs of his students heads easily. Most of them were hard at work because he always gave them essay questions that would take a long time to answer. He saved himself tons of time grading meticulous brain regurgitation in the end, and it required students to think on their own.

He was a hard teacher, but only because he wanted to be a part of a freethinking future. “Too much rote memorization leads to robots,” he would say over and over again in classes through the years. He was hard, but fair. Wait… I heard that line in a movie one time, and it stuck with me. It was Brick, a pretty interesting neo-noir flick with Joseph Gordon Levitt. The director and writer used old ’30s gangster dialogue and innuendo set to the backdrop of a contemporary high school. It worked well. Regardless, I have to get back to my point. Michaels was… 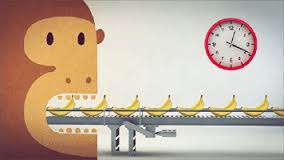